ChiroTouch is an electronic health records (EHR) and practice management system designed specifically for small to midsize chiropractic practices. It combines electronic health records, billing, patient scheduling, outcomes assessments and inventory management in a single, integrated suite. The EHR has custom templates for chiropractors, along with image management, dynamic SOAP notes and real-time patient flow with room management capabilities. The EHR provides lab integration and wireless support, and it can be used on a PC or on an iPad through the CTProvider iPad app. ChiroTouch's billing application features eligibility inquiry, claim scrubbing, automated batch posting, DME billing, workers’ compensation billing and other capabilities. The scheduling application has appointment reminders, room scheduling, patient messaging and a patient portal. The entire system is HIPAA compliant. Chiropractors can send text and email reminders to patients, while patients can use the system to fill out intake and outcomes assessment forms before their office visit. 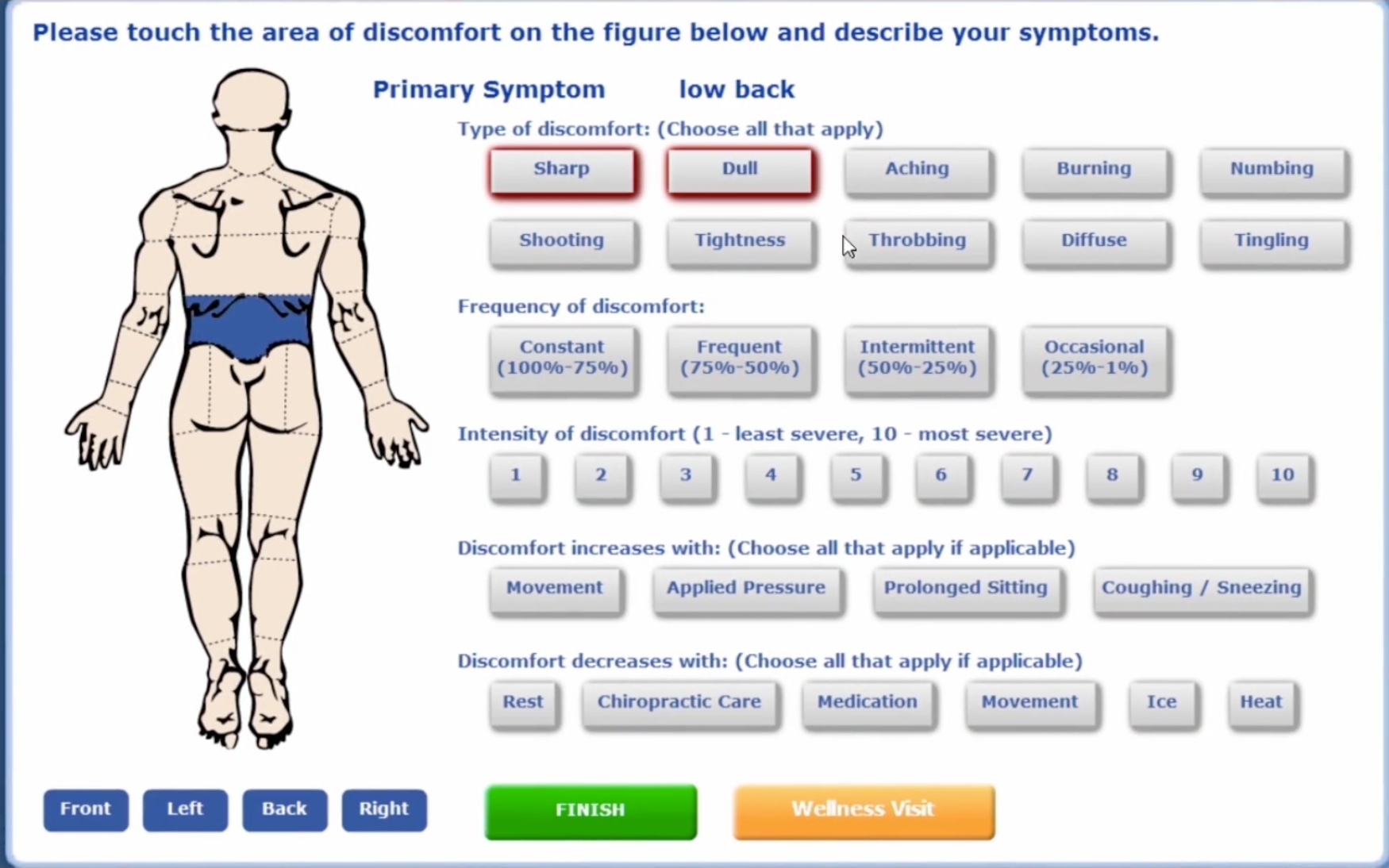 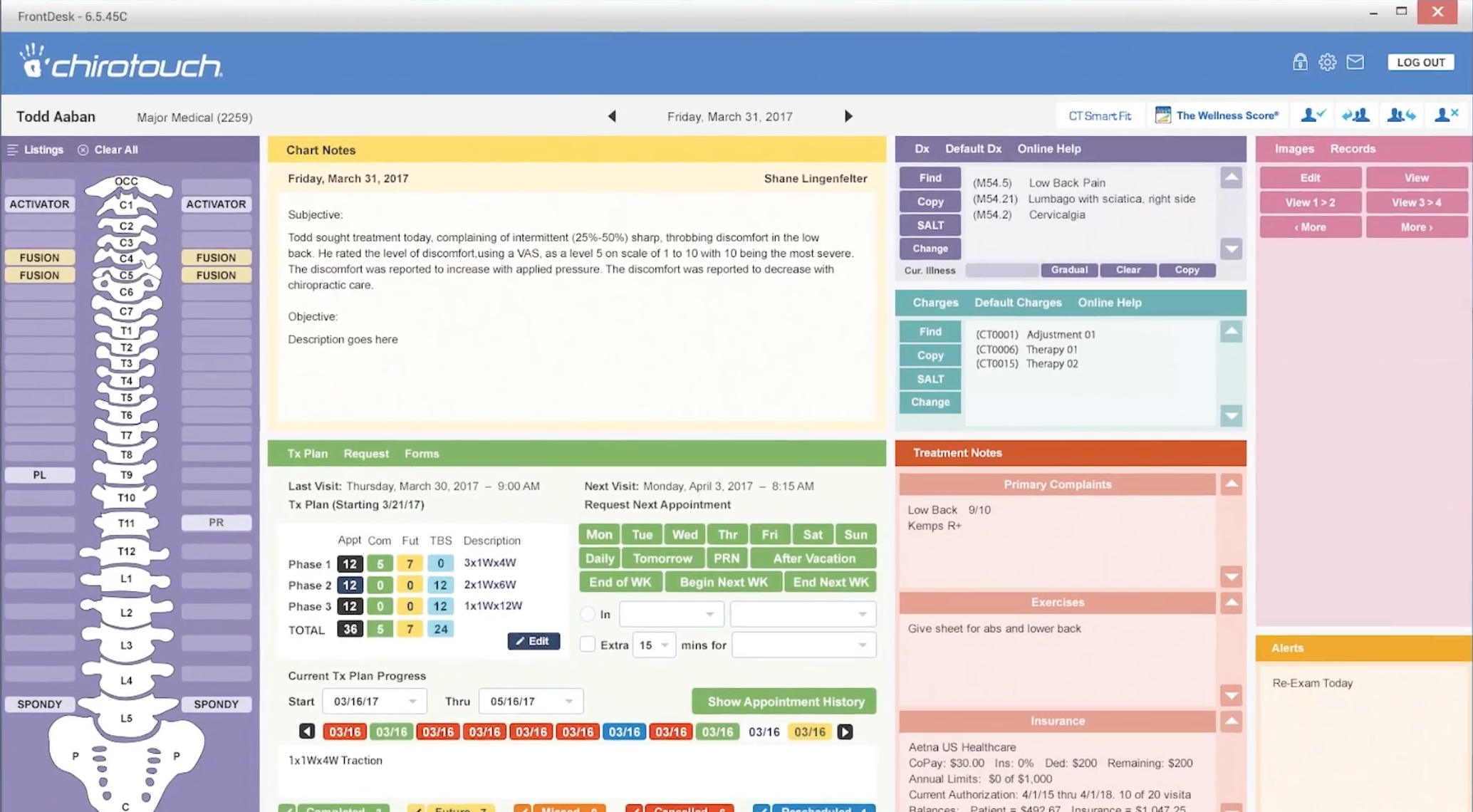 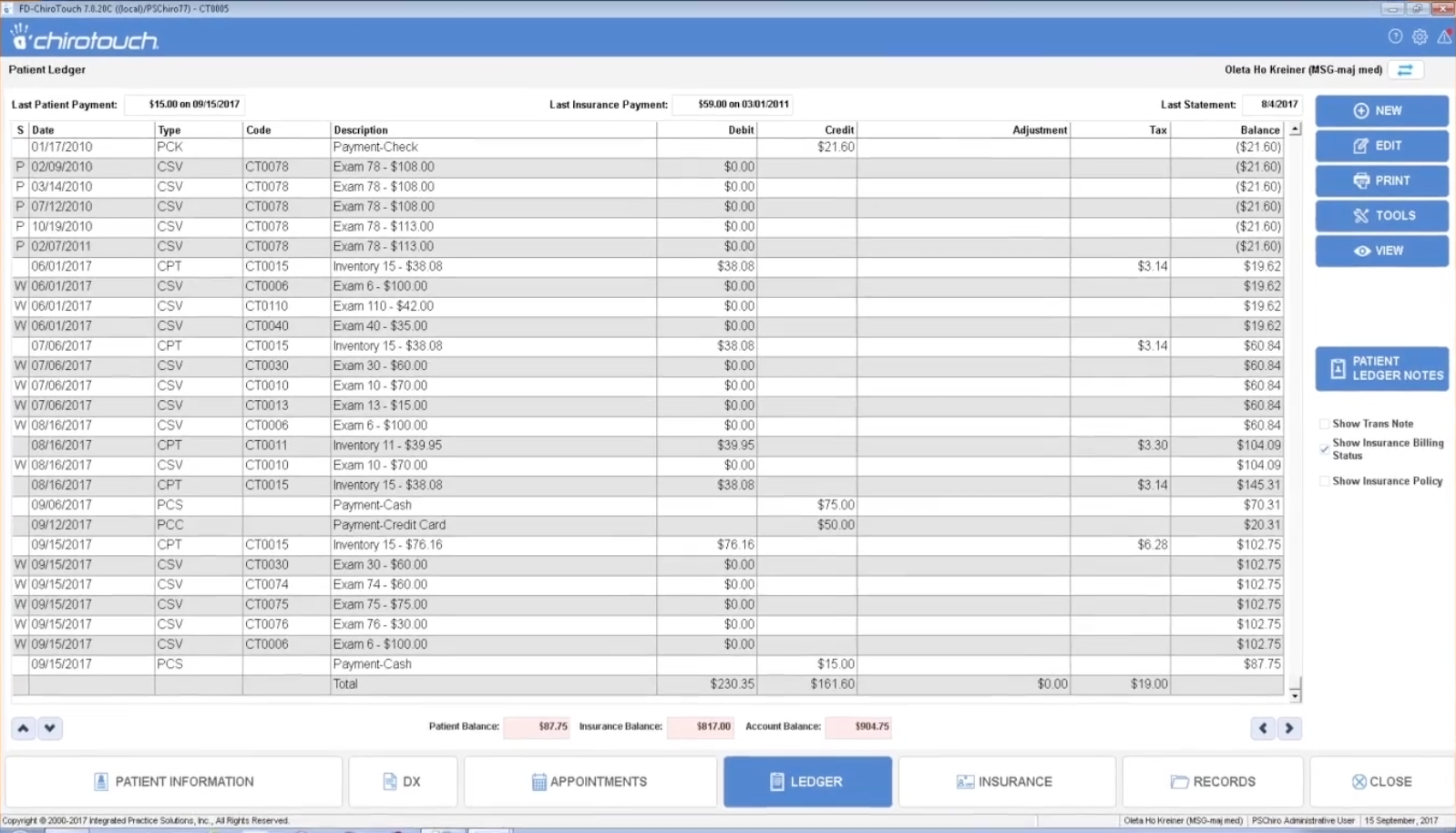 4,5 (Avaliações do 2506)
Vagaro is a cloud-based salon, spa and fitness business management solution that allows professionals to book...
Saiba mais

4,5 (Avaliações do 73)
Penelope is a cloud-based case management solution for nonprofits, governments, universities and health and social...
Saiba mais

I have worked with ChirTouch for 5 years and I love it. I recommend it to all chiropractors I work with. Customer service is, more often than not, very helpful and they are at least attentive and quick to respond. The whole system is seamlessly integrated from online apt requests, auto population of paperwork, self check-ins, billing, it really is outstanding compared to all other chiro software I work with. The only thing that needs help is the patient statements. Instead of separating the amount due from the insurance co and the patient, it will put those two amounts together, before the insurance has paid the DOS and print a statement as if the patient owes the whole balance so with the 100s of patients we have, it is not economical to print all those statements and go through them one by one for accuracy. I have yet to figure out the best way to print accurate statements in bulk fashion and welcome help from ChiroTouch or anyone else familiar with this.

the intuitive nature of all basic functions, ease of use and organization

One thing only - the patient statements are too complicated when trying to do a 'mass' monthly production.

Better than what we had, but not amazing.

We were moving from an EHR that was not working well for the clinic.

The version I have is hosted at the office. I know that EHR is going to an online platform and that is the "in thing" right now. But, with the hosted version, I own the licence and once paid off, I don't have to make that 400$ a month payment to use it.

They do not guide you on how to use the software in real life practice. Yes, they teach you what the buttons do. But knowing what the dials on an airplane mean is not the same thing as flying an airplane. They only give you access to the manual for the program if you buy their maintenance package. But, the manual is very lacking on any detailed information that makes it extremely useful. It is a very cumbersome software package to start using. Also, they do not integrate with QuickBooks. I wished that I could get the finances from this program to talk with QuickBooks.

CT has been a GREAT addition to the practice

The customization of my records has been great. I am able to document quickly and completely due to the robust nature of the program. The interface with the Scheduling / EHR / and billing has been a god-send, errors that used to occur have vanished since using CT.

Because the system is so loaded with features, it may be a little overwhelming for new users. Once you get on a few training calls, all those worries go away.

Have been using CT for a little over a year

ChiroTouch is quick can make a note in a very short time. The staff members are nice. The Front Office portion is very good. The touch screen processing is very nice.

1. The charting takes a significant number of clicks to create a really compliant note. The daily notes take a good bit of work to make them show a difference from one visit to the next. Easy for a cash patient, not so much for an insurance patient that has to meet standards of someone looking over your shoulder to meet compliance.
2. The staff is unable to do any input into the chart as a staff member. They are force to use the logon credentials to do something as simple as putting in PHI or ROS (and if the doctor is creating a note while they are using the doctor's credentials to add this clerical info, the note being done by one of the users will not be saved)
3. The outcome assessment info is not integrated into the chart note; it must be imported to create a graphical reference but is independent from the note itself. My preference is that the data would actually be in the chart note itself. If this was done, the program could be used to create meaningful goals based on the outcome assessment instead of just collecting data for reporting.
4. Vitals for the EHR component when put in for meaningful use are not integrated into the chart, which causes double entry.
5. The CT sign-in is cumbersome and really aggravating. The patients often click "no symptoms" just because it is the easiest choice. They cannot have any realistic options to show radiating pain; it just makes them chose pain at each site. (For instance, neck pain with radiating arm pain would end up being reported as neck pain, shoulder pain, and elbow pain. It does not show any connection that the extremity pain is coming from the neck.

There is a form that allows for radiating pain, but it allows the patient to say things that do not make sense, like neck pain that radiates to the foot (in the same sentence they can say it does not refer) and that it radiates into the right arm. Many times, it takes 3-5 mins to fix a subjective that the patient has put in.

It also does not allow for doing documents that are attached to a daily note, like a doctor's note, digitally. They have some of these in the program, but they are not directly integrated and just add another step instead of making it a simple process.

Not The Best for Cash-Based Practices

Generally speaking, if you need the bells and whistles of insurance forms and collections, ChiroTouch might work for you. If you are a smaller practice or are cash-based, this program is too much work with too little function.

Once you have things set up, there are a lot of "automatic" features to use. As a physician, charting is a large part of my interaction with an EHR software. It took a long time to get things how I wanted them, but once you get all of your macros set up, charting can be as easy as clicking the right buttons.

Many of the features that we were sold on at the beginning of the process with ChiroTouch were add-on services with additional cost. Also, to get even base-level technical support, you have to pay a monthly or annual subscription fee. The user interface is stuck in the early 2000s and not customizable to look any better than it does. We purchased computers specifically for ChiroTouch work stations, as recommended to us by ChiroTouch. These were already outdated and unable to support software updates within the first two years of using the software.