Time Tracker is an employee time and attendance tracking solution designed to simplify employee tracking and reduce administration using automation functionality. With Time Tracker, businesses are able to examine and track employee activity with employee timesheets , GPS time tracking, an integrated employee time clock, and employee analytics. Other features include employee scheduling, expense tracking, billing and invoicing and online payments with Stripe integration. Time Tracker allows employees to track and submit time entries using it's iOS and Android compatible mobile app. From the palm of their hands, employees are able to clock-in/out and take breaks with electronic time cards and receive alerts and push notifications. Team managers are able to manage employee timesheets with time editing and monitoring, and bulk approval/rejection. Managers can also identify timesheet inaccuracies and know exactly who is "on the clock" by tracking the status of their employee in real-time with GPS time tracking. For businesses using traditional punch clocks, Time Tracker offers an integrated digital time clock that allows employees to log in using 4-digit pins or facial recognition and will automatically notify managers whenever a punch event has occurred. Time Tracker also provides real-time reporting capabilities that allows managers to capture key employee analytics with customizable drag & drop dashboards. Managers are able to gain valuable insights into income growth, employee time, billable hours, and many more. 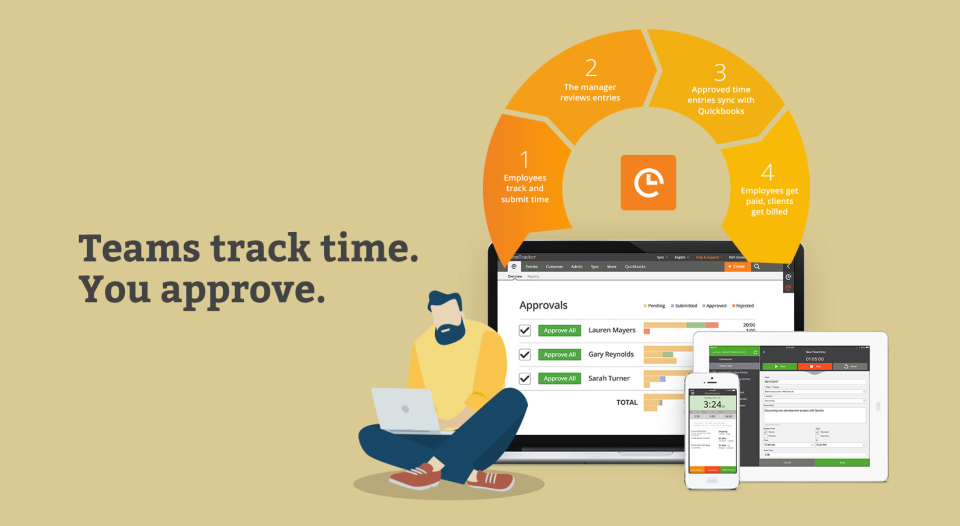 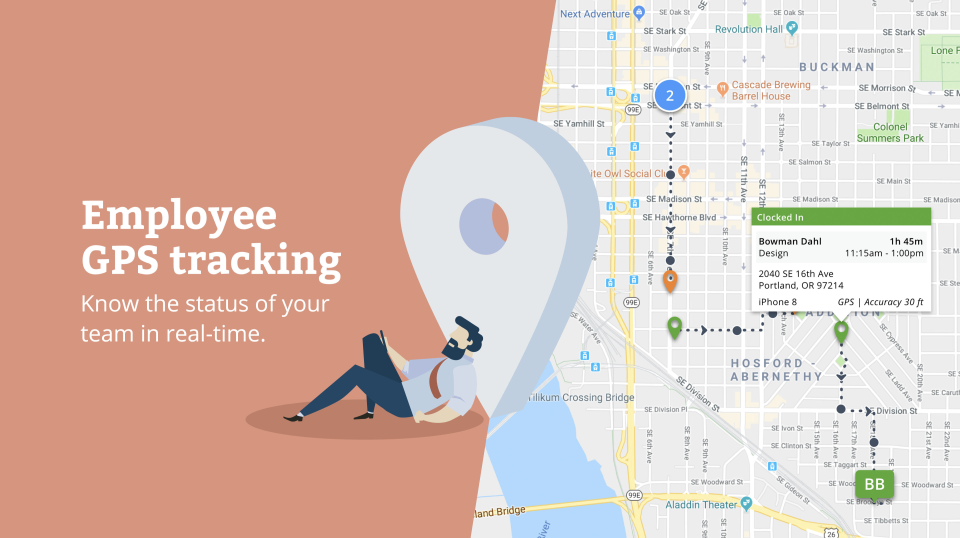 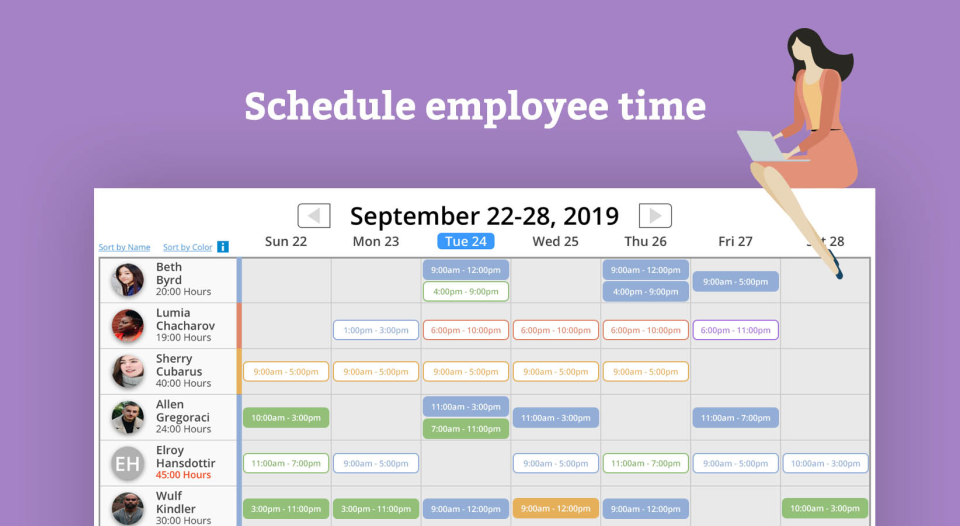 4,5 (Avaliações do 534)
BigTime is an online time and billing solution designed to serve professional service firms like accounting,...
Saiba mais

4,5 (Avaliações do 525)
TimeCamp is a 100% free time tracker for teams. Unlimited users for $0. TimeCamp is a cloud-based time tracking...
Saiba mais

Expenses and Invoices are better tracked by Time Tracker.

All of our invoices, receivable payments and our expenses can easily manage without ant effort. It also allow me to create and make the best templates of expenses and recurrent invoices with also manage them properly. I can better track the time of billing and expenses and then receive the payments online. The invoices options and billing designs are so flexible by Time Tracker.

With the help of Time Tracker software, it is so easy for us to better manage all of our invoices by tracking the time billing and to create the customize invoices to get the payment transaction online in faster manner. It is a fully accounting and invoices software because it automatically manage our bank accounts and bank balance sheets assets. We are also able to send all of our invoices with payments to our customers. By Time Tracker, the scheduling of our payments with invoices and expenses are so great because we have a lot of controls about the information of our invoices. So, it is very easy to set up our operations, sales and inventory payments by this efficient software. The dashboards features really told me about my accounts conditions with excellent invoices and billing. If you receive your payment and send within a second, then you must need Time Tracker software.

The main drawback of Time Tracker software is that it does not have the ability to remind about the pending payments, sending invoices and receiving payments. It also does not provide the records of all the previous payments, contacts and store invoices but it has the ability to store the customer information for upcoming invoices, payments and accounts schedules.

It has helped us to keep track of our employees and where they spend their time, keeping records of job-sites w/uploads like photos, billing for services and notes on properties.

It has helped us to keep track of our employees and where they spend their time, keeping records of job-sites w/uploads like photos, billing for services and notes on properties.

It can offer more, like client support, but they are very good because they listen and get things done, like a Spanish version!

My favorite feature about this software is that you can leave it up all day without it timing out. The previous software used would time out after and hour, take long to load and would result in me not tracking time accurately. I would wait days before logging time than I would forget what was accomplished.

When I submit time I can no longer change it. I know this is an administration function with in the firm.

Used TimeTracker of a year but then switched away

TimeTracker was an adequate product for the year we used it but was ultimately insufficient for our company's needs.

TimeTracker was one of the few products on the market that actually fit our needs as a software consulting firm. Most importantly, it allowed tracking time entries against a two-tiered hierarchy of clients and projects and allowed free-text descriptions of time entries. We had been using spreadsheets previously and this was a substantial upgrade for us.

Other nice features:
* Ability to mark entries as billable and not billable
* Ability for at least some users to be able to view and edit other users timesheets
* Ability to mark projects as done, thus preventing people from billing more to them

Ultimately, we decided to move away from TimeTracker after using it for a year because of three big faults:

1. Incomplete API coverage. The TimeTracker API only exposed some of the data available in the system, and didn't allow for all types of modification. For example, you cannot retrieve a client's billing details via API nor can you edit a time entry. This is severely limiting in the addons that can be built to work with the product.

3. Slow and occasionally buggy interface. A number of pages on the website load slowly. It can take a lot of clicks to do time entry or edit time entries. And there are obnoxious bugs in primary workflows. For example, when changing the project of a time entry, the activity filed gets cleared as well and a popup box must be cleared before you can proceed. As another example, when removing time entries from particular days, deleting the number of hours is not sufficient to clear the time entry.

Great, our company entered time manually on paper time sheets for over a decade and this has allowed us to save time, money, and allow our managers/owners to cut back on people entering in more time than they should and actually understanding how much time is going to what jobs.

The ability to segment users and managers is essential to our company's structure. Being the administrator and having the ability to go in and fix any user's time sheet is also great.

The mobile app needs improvement, specifically when entering in time. Don't put the billable toggle down at the bottom because when a user is entering non-billable work they should have no customer. Therefore if the user is going to enter non billable time they will always get a confusing error message unless they go to the last item on the mobile app to toggle off billable first. Also it would be great if there was a feature that forced the app to sync with the database automatically.